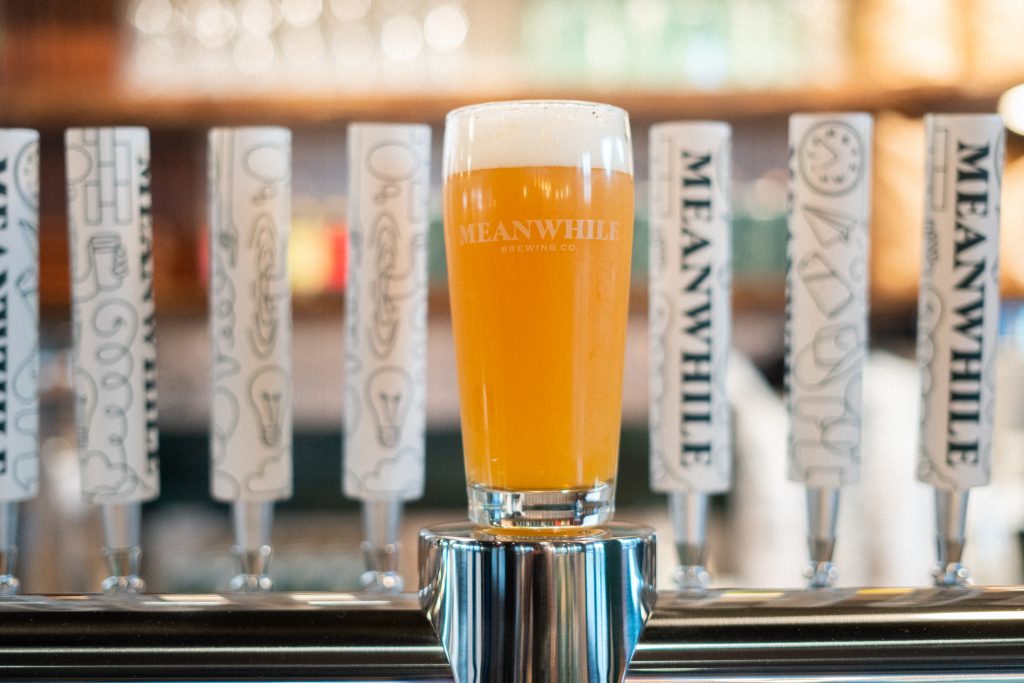 Although 2020 has been the year of relentless unknowns and insecurities, the Austin beer community can celebrate a successful fall brewery opening! There are several more in the works, so make sure to subscribe to CraftBeerAustin.com for all the upcoming scoop.

Who Is Meanwhile Brewing Co?

“Inspired by a love of literature, the name “Meanwhile” is meant to gently remind our fellow humans that, though the world can be stressful and scary, there is often something wondrous right underneath your nose,” says Conner Gilfillan, Director of Sales & Marketing.

If that isn’t a refreshing sentiment and reminder for this year, I don’t know what is.

Austin is incredibly lucky to welcome the Meanwhile Brewing gang. Founder & Brewmaster, Will Jaquiss and Director of Operations, Nao Ohdera from award-winning Breakside Brewing in Portland, Oregon have created a top-notch team they’re kind enough to share with us.

⁠Got an idea as to how to use this field? We'd love to hear your pitch!⁠ ⁠ #Turfsup⁠

“Our opening taplist is a good glimpse of the fun beer we plan to offer,” says Jaquiss. “We look forward to serving a multitude of styles and experimental brews in the years to come.”

They will have 6 beers on tap consisting of:

They have partnered with Parlor Coffee based out of Brooklyn who will be providing the roasted coffee. Cold brew will be on tap from Tiny House Coffee Roasters.

If you’re not in the mood for a beer, you can also enjoy Richard’s Rain Water, “boozy” seltzers incorporating house-made seltzers, frozen drinks, as well as sherry, wine, & sake cocktails!

The spacious outdoor grounds are a great place for community and fellowship. There is a large stage for musical acts, storytelling, and movie nights built with the aid of the Mohawk, as well as 3 food trucks that will be open for breakfast. Guests will have the option to enjoy the food menus of Craft Woodfire Pizza, Garbo’s, and Pueblo Viejo. Whether you’re in the mood for pizza, lobster rolls, or Mexican street food, (or a little bit of ALL of it)… These guys have your back.

The official “backyard” space brings quite the awe factor. Coming in at just under 4 acres, the footprint offers plenty of outdoor seating and a funky playground area that blends in perfectly with the rustic backdrop. (Think a la Swiss Family Robinson.) 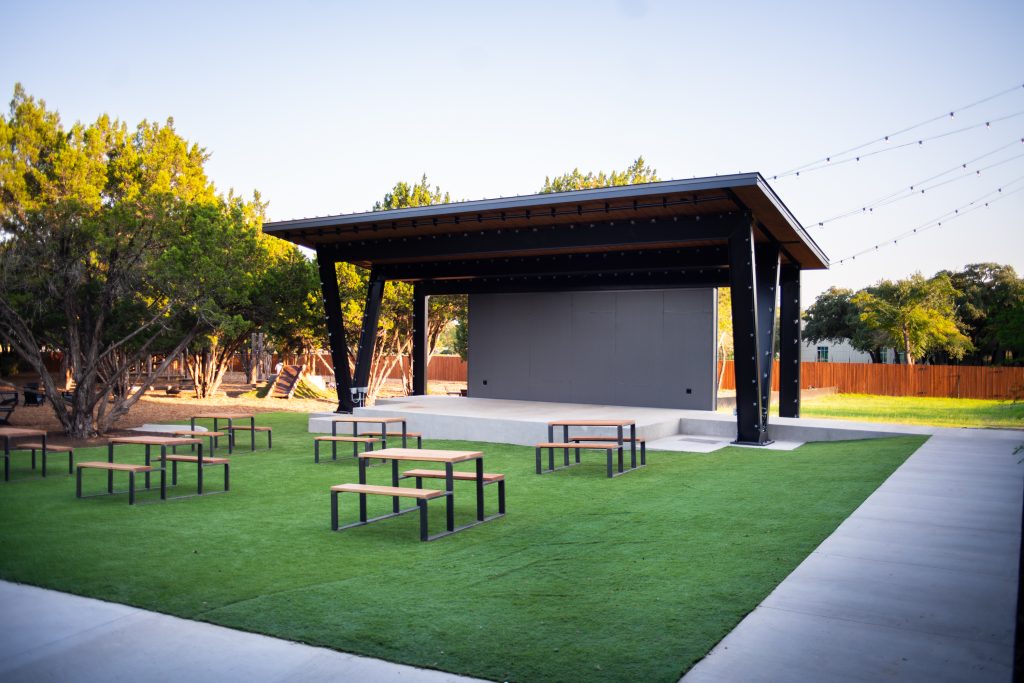 The Meanwhile gang has deep soccer-loving roots and built a 45-yard long turf which will eventually be available to rent for official soccer practices, but also just for some pick-up game fun.

They hope to see the space used for flag football, tennis, a runaround kiddo space, and for croquet after they add netting and fencing to the court. Other future goals involve a mini “hammock forest”, and a bocce court for even more outdoor game fun. (Please Note: The playground and soccer field will remain off-limits due to COVID restrictions until it is safe to open them.)

(Due to COVID, the taproom will only be open for ordering at the bar. They ask that you enjoy their grounds in the meantime.)

According to the designers McCray & Co, the tasting room was inspired by a mix of the more formal elegant European pubs, meets welcoming Austin charm. 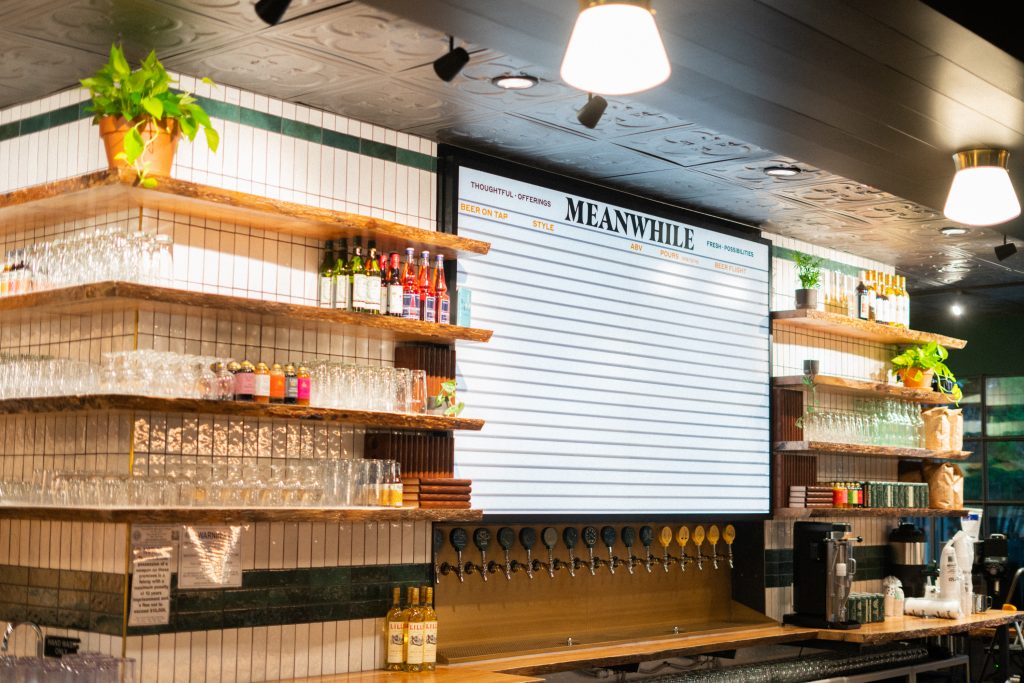 “We chose the live edge pecan slabs to represent the bar top and the brewer’s table because they come from this place, and they were milled, sanded, finished, and installed with the same care that goes into brewing Meanwhile’s beer. We worked with many local craftspeople, like Summerwood Building, Ankor Studios, Mother Built, Kim Smith / Rayne Wares, and Mend, to name a few, to create a one-of-a-kind space that feels humanscale, considerate, and cozy,” says McCray.

Many creative brains contributed to bringing Meanwhile to life. With the combination of creative agency Guerilla Suit and OPA Design Studio serving as the architects and designers, the space is truly unique. Both are veterans in the field of building breweries and their brands.

As you explore the taproom you will notice hand-drawn doodles that serve as the funky backdrop of the space. Meanwhile will offer a rentable space with a large garage door style window and a few televisions for those important sports games.

The 15 barrel 3-vessel brewhouse can produce up to 3k barrels per year. There are 6 serving tanks that directly serve the taproom. You can’t get any fresher than that! Meanwhile has a dedicated lab as well as a temperature-controlled barrel room for the limited release beers, and they left space for future expansion. As pandemic restrictions are eventually lifted, tours of the facility will come to life. Until then, you must look on and enjoy from a distance. 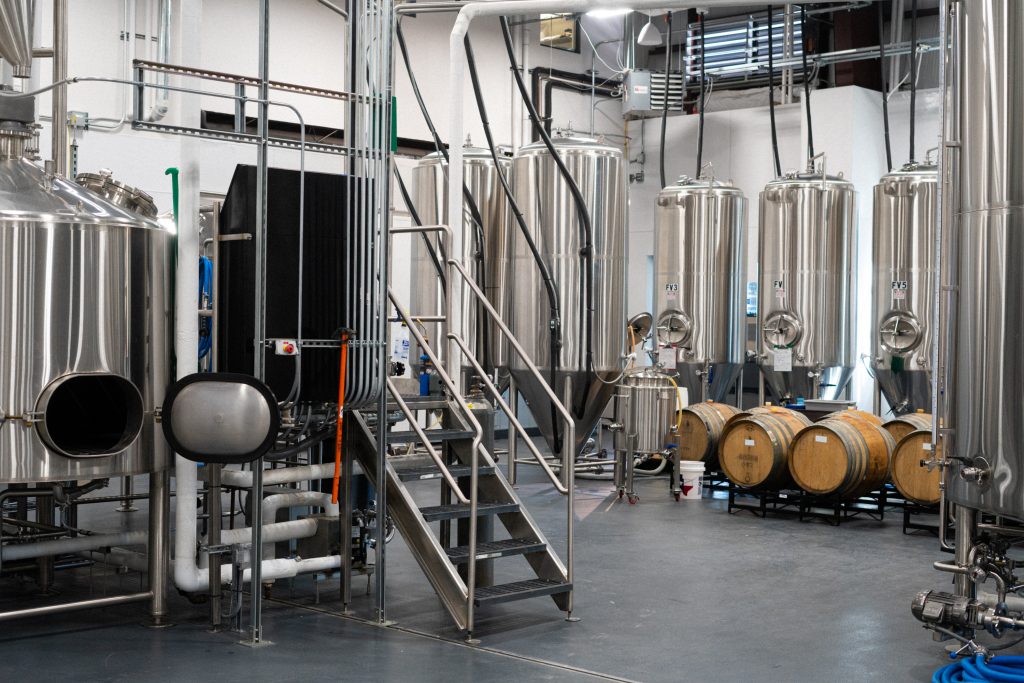 Why not throw an impressive barrel program into the mix? The creators are experimenting with many flavors setting goals to release their first version at the end of the year. From classic bourbon barrel-aged beers to pinot noir, gin, chardonnay, rum, and vermouth barrels, we have some unique flavors coming our way. Each barrel has been hand-selected for their blending process from old Oregon friends, Stoller Family Estate wine barrels to new buddies, Treaty Oak Distilling gin barrels here in Texas. “No barrel has a predetermined beer in mind,” states Ohdera. Adding, “It will all be based on how the barrel develops over the months and years to come.” Expect the program to continue growing with plans to offer clean, wild, and sour aged beers.

“We wanted a place that people felt equally at home bringing their laptop and having a cup of coffee in the morning as they would meeting friends for a fresh air lunch, or for a beer in the afternoon with their pup and maybe hanging around to see some live music in the evening,” Jaquiss concludes.

You heard him. Get your calendar, and plan to start your morning with coffee, or clock-out at the end of the workday and enjoy a beer or cocktail at Meanwhile…starting this week!