After eight years in the biz, the Pinthouse Pizza brand is opening the doors to its fourth and largest location yet, Pinthouse Brewing. Drumroll… official opening will commence with a limited menu this week! Yet another stellar southeast Austin brewery opening! Brewmaster & Co-Owner Joe Mohrfeld, Head Brewer Kirkland Wheeler, and Marketing Manager Rob Larry played tour guide sharing the scoop on their newest endeavor.

Expect the same quality we’ve all come to anticipate from the Pinthouse name, but prepare yourself for a lot of impressive updates. The ambiance, decor, and merchandise all have a unique flair. You’ll find a stunning brewhouse and venue space that you can admire during tours, a barrel-aging program, and an exciting food menu sans pizza this go around. Pinthouse’s newest venture hits it out of the park, guys. 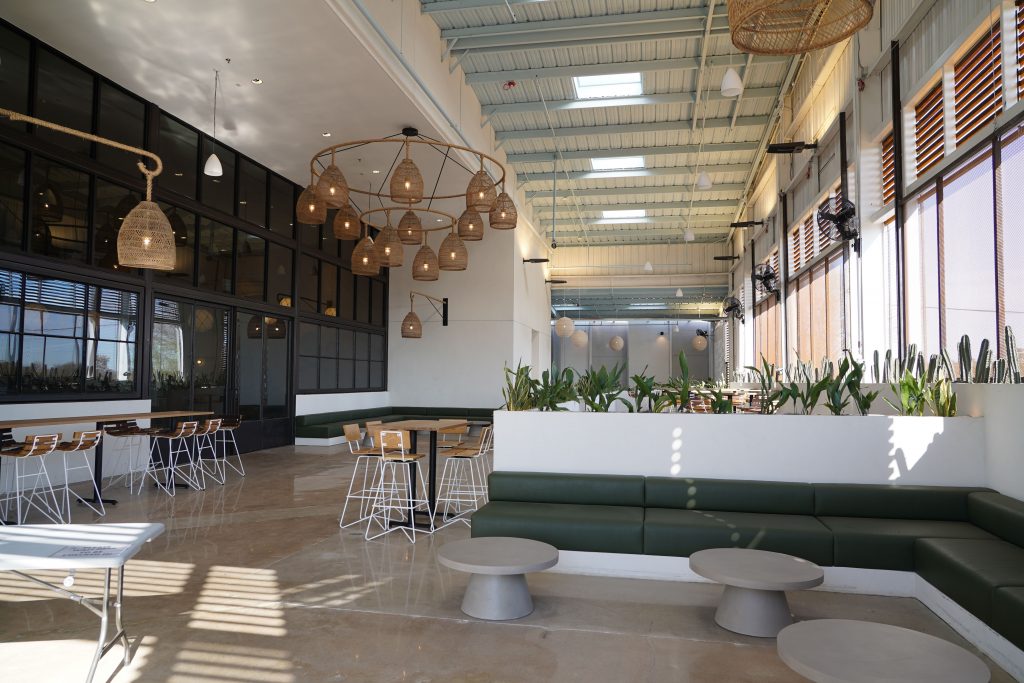 For longtime Austinites, the building may be recognizable from its past lives as the Midnight Rodeo and Dance Across Texas. The Pinthouse team wanted to save the landmark but put their stamp on it. “It’s fun to be able to take a building that’s been here forever and take it into the next era,” says Mohrfeld. The thriving cacti and subtle, calming color scheme give a Marfa vacation vibe. Quite a different feel from the aquatic seafarer theme you’ll find in the other pubs.

The massive patio’s airflow, natural light, and constant shade are hard to ignore. The breezy dog-friendly space will offer much solace during the toasty Austin summers. There’s a water bottle refilling station to help encourage sustainability. Outside, you’ll also find an outdoor bar for window service and to accommodate those famous limited release events. There are three different places to order within the facility meaning you’re never far from your next brewski. 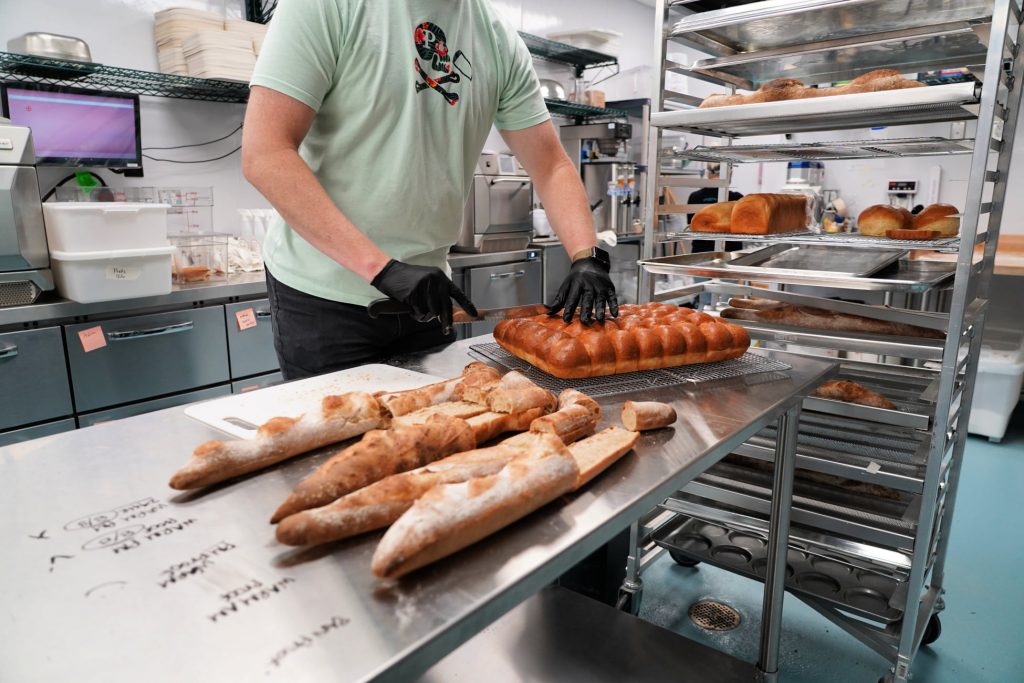 Pinthouse Brewing has dropped “pizza” from their name and their menu this go around. When you dine at the Ben White location expect gourmet sandwiches, salads, pretzels, and lots of finger food snacks. They’re excited to accommodate the lunch crowd with creative bento box style items. Boasting house-baked bread, prepare for enticing smells and delectable bites. You can also expect only Pinthouse beer to be on the wall with the exception of guest wine and cider.

A designated merchandise corner loaded with new items is visible upon your entrance into the pub. You’ll also notice a revamped logo on updated glassware. “We’re always evolving on the beer and food side. This is such a fun opportunity to really do something new from the design side,” Mohrfeld states. 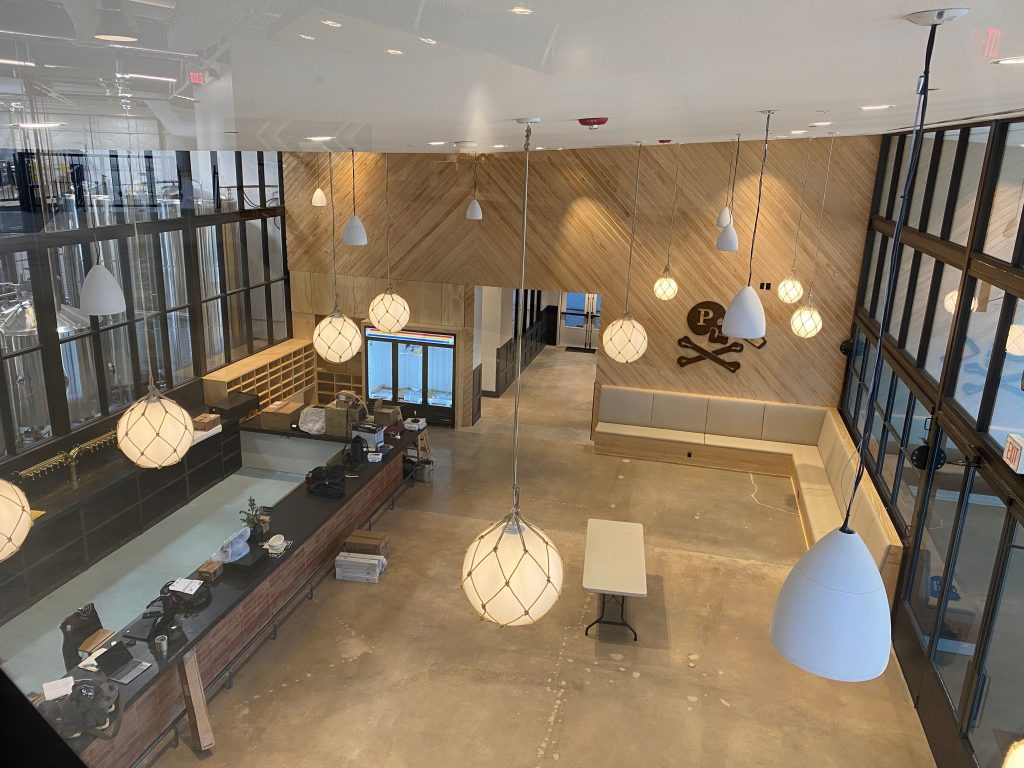 Pinthouse Brewery will be the first of the franchise to offer formal brew tours, once the pandemic allows, of course. Patrons will see the inner workings through an immersive experience alongside a Pinthouse brewer. The tour wraps in an exclusive upstairs bar overlooking the entire brewhouse as well as the taproom. The nook has a capacity of over 100 and will also serve as rentable venue space.

The tours are one facet of Pinthouse’s want to share the educational side of what they do. Larry notes, “One thing we’ve always wanted to do is have a formal program where we can teach people about our beer and give them an actual walkthrough beyond sitting at the bar.” Mohrfeld confirms the pub will be family-friendly but also focus on the craft beer audience and release parties that faithful fans line up for. He admits, “We’ll do a big event on a Saturday and it’s super fun, but then you have the family that goes in every Saturday, and now they can’t get a table.” Luckily, now there’s a Pinthouse for everyone’s preference.

The Ben White location will feature an exciting new barrel program and lab led by Tom Fischer as the Director of Brewing Innovation. Pretty cool title. Having someone dedicated specifically to quality consistency has Mohrfeld rather pumped. “We’re already seeing huge benefits with the consistency of a recipe’s production between locations…getting everything a little tighter and making sure we’re putting our best foot forward,” he adds.

As a brand, Pinthouse has traveled to many other state-of-the-art breweries, picking up style and safety inspiration. Their new lab has elements influenced by Firestone Walker and all its glory. The lab will allow for blind tastings to continue their ability to hone in and perfect flavors. All things that mean the best product for us drinkers. 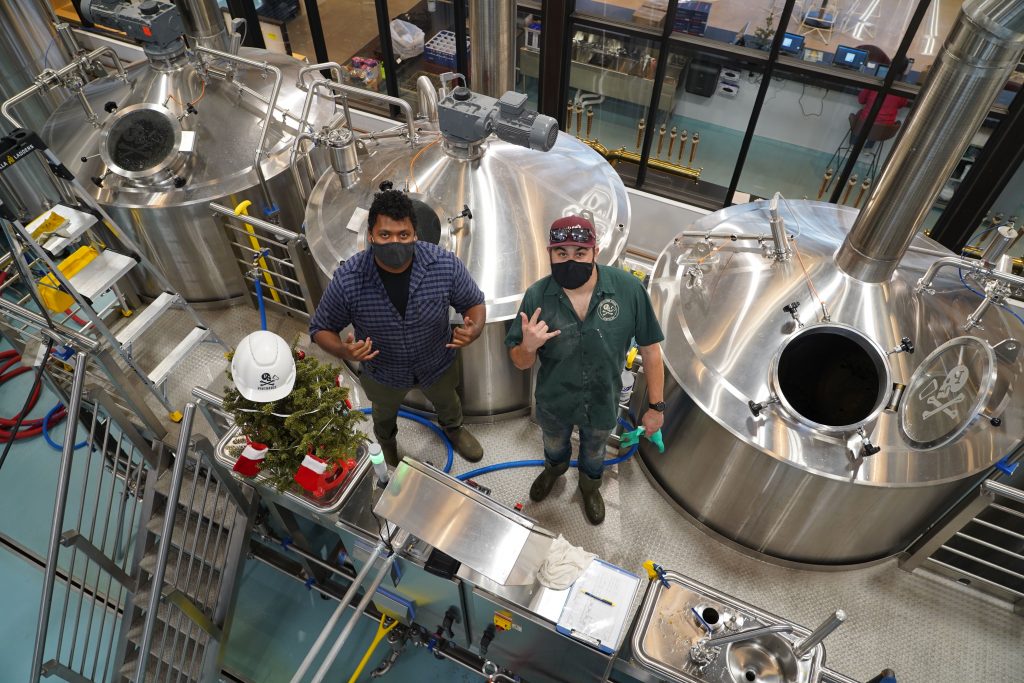 A pristine new 15 barrel brewhouse delivers speed and efficiency. According to Wheeler, the new system allows them to brew more, faster. Not only is the brewhouse bright and shiny, but it also features above and beyond safety features while leaving room for future expansion.

The Ben White location will take on much of the production of the company’s staple beers like Electric Jellyfish, Training Bines, and Green Battles. “The beauty is, with increased production here that allows other pubs to have a little fun, in terms of brewing smaller batches,” Larry says. Think new diverse dry-hopping methods and dabbling more into pilsners, lagers, sours, and other styles.

Because the new space will take on much of the larger scale beers, they will also handle the majority of the company’s canning needs. Building a designated space for the canning line allows for a short run from the tanks thus creating an ideal temperature scenario. Every task has a designated pre-planned space ensuring no one steps on anyone else’s toes. Crisp, tidy, and efficient. 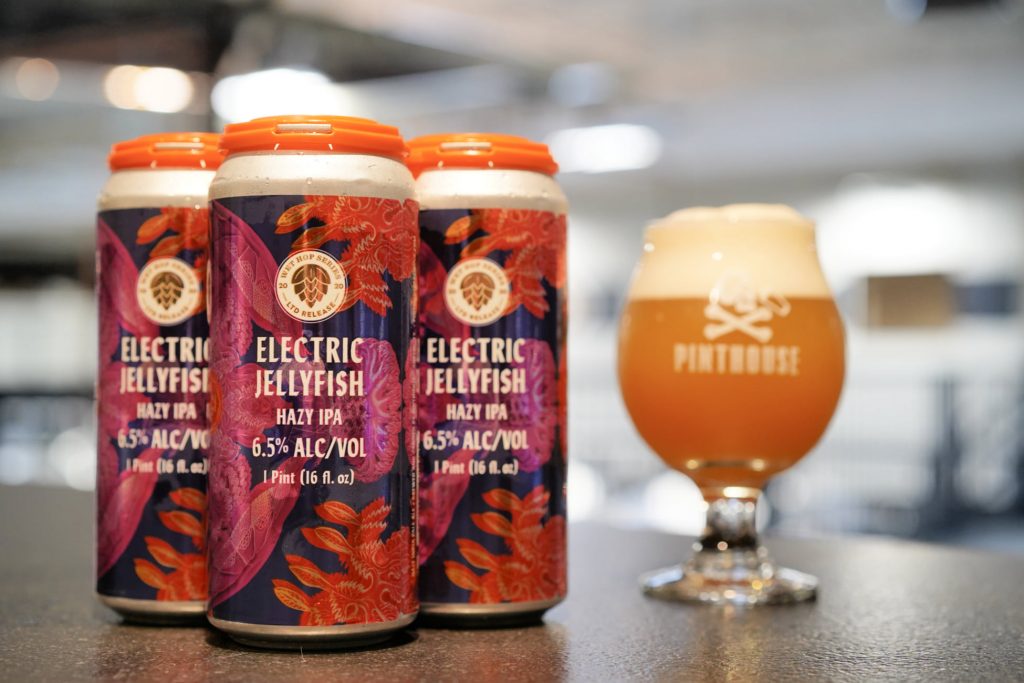 You’ve likely noticed that Pinthouse’s popular Electric Jellyfish is now available at your local H-E-B. Our San Antonio friends can celebrate that they will also have EJ at their disposal soon. In early 2021 distribution to select accounts in San Antonio will begin. According to Mohrfeld, there’s been a direct want in San Antonio for quite some time. “There are some great places down there and to us, it made sense, kind of filling in the Central Texas corridor,” he notes. San Antonio is first on the list, but the Dallas and Houston areas are being considered for future distribution as well.

Mohrfeld points out how crucial distribution has been for their pandemic survival. They went into distro in 2015 in order to participate in events, festivals, and to focus on a few key accounts. The growth has been steady and organic leading to the opening of the Round Rock location and now Ben White. He adds, “We see something like COVID hit… Had we not had distro, we would have been in really, really tough shape.”

Over a dozen collaborations were on the calendar for this past year. Covid-19 postponed many of them. In recent weeks Pinthouse released their second annual Pizza Party Pils collab with the ABGB. This month they’re partnering with Zilker Brewing on a release and stay tuned for details on a spring Jester King mashup. Lots of local projects in the works.

While collaborations can make logistics difficult, Mohrfeld points out how much he appreciates them. “You learn so much as a brewer and we get inspiration. I think it always makes our beer better and keeps us motivated. I think that’s the biggest thing that keeps us always pushing ourselves to be better.”

As Covid-19 continues creating challenges for businesses, seeing companies adapt, and persevere is encouraging. Larry points out, “It’s been really cool to see the community come together and support.” The wait is finally over on this highly anticipated opening. “You’re still getting the Pinthouse service, the food you want, the beer you want, but a new experience,” Larry concludes.

Please continue to #SaveTexasBreweries and #DrinkLocal. Our beloved craft breweries need our support. Congratulations Pinthouse Brewery on such a successful new chapter!