The Black is Beautiful worldwide beer collaboration has been lovingly embraced by many Austinites & local breweries. For those that are not familiar with the initiative, Weathered Souls has asked breweries globally (over 1k now worldwide participating) to come together to help bridge the gap for equality, to raise awareness & funds for the injustices people of color face daily. Weathered Souls provided the stout recipe as well as artwork, provided by Austin artist, KD Design, and allowed breweries to choose the organization in which to donate the beer’s proceeds.

While you are out & about supporting all the awesome local releases of Black is Beautiful keep an eye out for Austin’s own, Marvis Dixon, flag in hand. Dixon has truly embraced the initiative and has done a fabulous job representing the best parts of the Austin beer community & the inclusivity it provides.

We’d like you to meet Marvis. Marvis works for @familybusinessbeerco and has been making the rounds to all of our local breweries that are participating in #blackisbeautifulbeer in the Austin area with his amazing flag. We’re so happy to have connected with him and can’t wait to see him again, hopefully soon! Thank you for stopping by, Marvis. You rock! @panamanc #weatheredsoulsbrewing #blackisbeautifulbeer #humblepintbrewing

Dixon works for Family Business Beer Company which released their version of Black is Beautiful in early July & has affirmed to do his part to bring awareness to the worldwide collaboration & the importance of the injustices people of color face daily. He recently took part in a Virtual 5K for the cause and has vowed to participate in his second next week. In his first race he completed a hike starting at the Moviehouse & Eatery, then to The Brewtique, ending at Redhorn Coffee House & Brewing Company totaling over 12 miles.

What exactly IS the Black is Beautiful Virtual 5K? The project was created by Roger Lewis with Beer Garden Run as a way to also support the Weathered Souls Black is Beautiful initiative. Per the Black is Beautiful Run page the race is conducted on a full honor system and participants are able to complete the run in any manner they like, “the neighborhood, the treadmill, track, country roads, etc. In times like these we have faced in 2020, there is solidarity in getting out there with other runners/participants to complete a race and support a cause…even if it is just in spirit.” The Virtual 5K’s registration fees went as donations to San Antonio non-profit, 100 Black Men as well as the Know Your Rights Camp. Registration for the run has ended, which is all the more reason to support our buddy, Marvis! 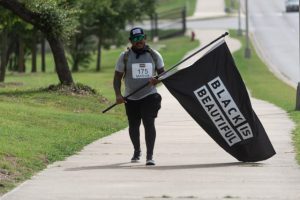 When asked why he wanted to jump head first into this initiative Dixon noted, “I wanted to support not only the cause but also Weathered Souls with the idea Marcus started. I got so close to the initiative because it was the right thing to do. Now is the time to stand up for what’s right and remember this is not politics, at all… supporting others (than myself) that have been affected by being treated wrong due to the color of their skin. We must be more aware of what’s going on and has been going on for a long time. Make others aware…and educate them.”

Hello all! We had many requests for more medals and shirts and were able to secure 140 more! So if you would like to participate in the BIB Virtual 5k and get an awesome medal and shirt, now is your chance!!! For registration and details go to www.blackisbeautifulrun.com (link also in IG bio). This is open to anyone anywhere. Cheers ALL! Shout out to Roger Lewis @beergardenrun for hosting this special race for the BIB initiative. 🙌🏽

Dixon’s first run earlier this summer showed full support from onlookers and Dixon relayed, “There were so many supporters honking their horns and cheering while conducting the hike.” He noted that he was tempted to hop in his friend’s vehicle for the last portion, but instead pushed on. When asked what his hopes are for Austinites moving forward, Dixon answered, “I want them to support those who are involved with the BLM and Black is Beautiful movement. Do not be afraid to ask breweries or businesses if they are going to support or donate to support the cause. Support local, and most of all support others that have the same mindset about what’s going on.”

August 2nd at 9am Dixon is leading a group of fellow hikers on a route from Whitestone Brewery to Hedgehog Brewing. “So far there is a group of 8 including myself who have signed up for the Virtual 5K,” he added. Dixon plans on hitting as many Black is Beautiful releases as he can with his personalized flag made by the talented local team at Pork Chop Screen Printing.

This is the time to come together, folks. If you see Dixon and his crew, snap a picture and give them a supportive car honk! Don’t forget to tag #BlackIsBeautifulRun, #BlackIsBeautifulBeer, & @CraftBeerAustin. Please continue to support local breweries and black-owned businesses. Cheers to inclusion and positive change! Way to go, Marvis!