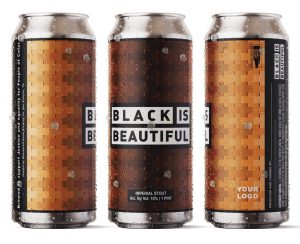 In recent years, beer-lovers have watched in awe of the camaraderie and supportive power the beer community can foster. Massive initiatives like Sierra Nevada’s Resilience IPA raising money to rebuild after the California wildfires, and more recently, Other Half’s All Together mission supporting hospitality professionals affected by Covid19, are testaments to how beer can rally people around a cause. The power of unity through beer is undeniable and sparked the idea behind Black is Beautiful. Marcus Baskerville, Head Brewer & Co-Owner of San Antonio brewery, Weathered Souls, is the creator of this now worldwide project. As a person of color his beer collaboration is a mission to bring awareness to the daily injustices BIPOC face. According to Baskerville via the Black is Beautiful site,

“Our mission is to bridge the gap that’s been around for ages and provide a platform to show that the brewing community is an inclusive place for everyone of any color.”

In order to participate, Baskerville is requesting breweries to “donate 100% of the beer’s proceeds to local foundations that support police brutality reform and legal defenses for those who have been wronged.” He also elaborated that while raising money is important, “the real issue is bringing education and information, which will bring forth change to a system that has fractured so many families and has been broken for decades.” The beer itself is a stout in which Weathered Souls is providing the base recipe. Beyond that, they are encouraging breweries to add their own spin and be as creative as they please. 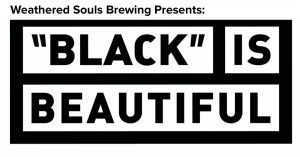 [Edited 10/22/20] At the point of this article’s posting, over 1,000 breweries total are participating, all 50 States are represented, and multiple countries outside of the U.S. have signed on to participate in solidarity. Australia, Belgium, Brazil, Canada, China, France, Germany, Indonesia, Ireland, Japan, Laois, Mexico, Panama, the Philippines, the United Kingdom, Rwanda, Scotland, South Korea, Sweden, Uruguay, & Vietnam are stepping up in fellowship. Breweries from New York to Seattle, San Diego to Tampa, and hundreds of cities in between like Dodge City, Kansas, and Honolulu, Hawaii have all jumped on board. Malt companies are also showing support, some offering to donate malt as their contribution. Over 100 Texas breweries are taking part and the Austin beer community has truly stepped up to support such a worthy cause.

Bryan Winslow, Co-Founder & Head Brewer of St Elmo Brewing affirmed, “Beer is fun and casual most of the time. I love those qualities in beer. But the nexus of this collaboration is neither fun nor casual. Enough is enough. We need to get to work and make sure we never have to bury an innocent man that was killed by the police again.”

When asked about the importance of being a part of this initiative, Brent Sapstead, Head Brewer of Hold Out Brewing noted, “Community outreach has always been a part of Hold Out’s model. There has never been a greater need for that type of engagement than right now.”

Eva Vaughn, Community Manager at Zilker Brewing Company stated, “Something I learned early on working for Zilker Brewery was how important it is to our team and founders that we prioritize supporting our community. I feel it’s important for Zilker to be a part of this project because it is bringing awareness and raising funds to support on a local level the injustices black people are facing day-to-day.”

Chris Rauschuber, Co-Founder & Head Brewer of The Brewtorium added, “It’s always great when breweries are able to give back to the community that supports them, but this project has the potential to create substantial, widespread and lasting positive change. Additionally, it’s helping to bring awareness to the lack of diversity in the craft beer community. Beer has the ability to bring people together and I hope I speak for all brewers when I say that we want EVERYONE to feel welcome in our taprooms. If there is anything we can do to eliminate obstacles to achieving that goal, then that’s another conversation that we welcome.”

WHAT IS THE STORY BEHIND THE LABEL?

The beer’s iconic label arose from the artistic talents of Austin’s own, Kevin Dyer of KD Designs. Dyer has designed over 50 labels for Weathered Souls. Three years ago he went out on a limb posting his version of a mockup label for Weathered Souls’ beer, Black Mamba, in hopes of becoming the brewery’s graphics go-to guy.

Dyer elaborated, “Marcus messaged me back that day saying “We need to talk”. From there we discussed the labels and designs going forward. The rest is history!!!” This particular project was handled with the utmost care and devotion. According to Dyer, “Baskerville tasked me to create a label showcasing the different shades of black people in some form of unity. The logo for Black is Beautiful was inspired by photos of hand made signs I had seen at recent protests. The simple black letters on white background separated out in their individual boxes to put more emphasis on the meaning of the words. As an artist, the idea of color swatches popped into my head…I then joined the shades together with interlocking shapes. This still highlighted the uniqueness of each shade but now showed their unity.” In conclusion, Dyer noted, “My inspiration comes from the passion of this initiative. If I can use my creative abilities to help make the world a better place count me in!!!”

What are Austin brewer’s hopes for the response of this collaboration? Rauschuber expressed, “We hope that this beer – not just ours but the HUNDREDS of versions that are part of the collaboration – will not only help raise funds for groups that are doing good in our communities but also spark conversations that lead to a better understanding between people who have had drastically different experiences when it comes to the issues of policing and systemic racism in our country.”

Vaughan noted the importance of long-term awareness, education, and work towards equality this collaboration represents and Sapstead pointed out how special it is to see such an incredible group of breweries coming together. Winslow ensured, “I love that this project was started in Texas, by a talented, black, Texas brewer. Texas gets overlooked quite a bit in the brewing world, in my opinion. We also aren’t known for being particularly aggressive in our quest for racial equality. This is a chance for all of us to work together to shift those perceptions. I want to send out a huge THANK YOU to Marcus Baskerville and his team at Weathered Souls for creating this project and allowing us to do it with you.”

In conclusion, Baskerville added, “As someone who has personally dealt with the abuse of power by the police, this recent turmoil the country is facing has hit home for me. As I write this, I contemplate how the country can move forward, how we as the people, can create change, and what it will take for everyone to move forward with a common respect for one another. For us, we feel that this is our contribution to a step. Sometimes that’s all it takes for change…We ask that you please stand with us to create something that has never been seen before and show the world the brewing community is one of a kind.”