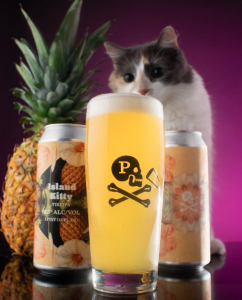 Here at CraftBeerAustin.com, we love championing our local beer community. Featuring breweries, events, brewers, owners, and other beer folk doing awesome things is our cup of…beer. If you follow just about any brewery in town on the socials, you’ve likely seen the brilliant liquid splash photography of Brian Ledden, the Beerdtographer. He does a fantastic job boosting (and spilling) beer and deserves his own shout out.

Nice to Meet You!

Brian Ledden boasts 16 years of photography know-how with experience in many other creative facets. Majoring in Radio, TV, and Film at UT he gathered the basics of camera usage. Intrigued, he gained further exposure by enrolling in a photojournalism class. While school is all well and good, he credits his most meaningful education to his on-the-job years of honing and expanding his skills.

Growing up, a strong catalyst has been motivation from his fellow-photographer father. “I feel like photos are a meaningful record of our lives, and arresting a moment in time from an artistic perspective is kind of magical,” he reflected. A college fluke helped shape his goals, admitting, “I thought I ruined my roll on my first school photo assignment and that had a whole chain of butterfly-affecting my entire life from there. I later developed that roll after I started developing my own color films and wouldn’t you know, it was fine.”

What’s Your History in Beer?

Ledden’s history in the craft industry runs deeper than just fandom or catching it behind the lens. He was an integral part of the Craft Pride opening crew spending several years behind their bar. When an interest in freelance photography crept into his mind, Craft Pride was lucky to be his first client. Running their Instagram account, creating print ads, shooting their content, and yes…even facilitating their famous rap videos. Most recently, you can see Ledden’s slick skills in Craft Pride’s video for the virtual Texas Craft Brewers Festival featuring MC Lunchbox. Do yourself a favor and watch below.

I inquired if his Instagram moniker “shoots beer photos, has beard” had more to it than meets the eye, or if it was brilliantly that cut and dry. He responded, “As far as the name goes it is just simple genius. I had to spell it as ‘Beerd’ so that people wouldn’t think I was the official photographer of the Austin Facial Hair Club or anything.” Rather than continue to use his personal accounts to post his beer photography, he embarked on the Beerdtographer.

The typical expectation in his freelance work involves shooting calm, still beers with pristine head. The motivation to create the total opposite, embracing the chaos and unpredictability hit him. Inspiration from other photographers like Josh Olalde representing No Label Brewing and the Houston area has influenced him. With Ledden’s knowledge of lighting, he decided he’d take a stab at creating his own unique version. He notes, “I started playing around with it, and found my own way to make the magic happen.” Indeed you did, Brian.

The question on all our minds, how messy do these shoots get? “I feel like it’s less messy than people think it is. I mean, don’t get me wrong, it is definitely messy, but compared to the way other people approach the challenge I feel like I am considerably more conservative,” he states. (Any paper towel companies looking for someone to sponsor?) In a nutshell, the beer’s set up with the perfect head alongside optimal lighting. If he’s focused on a standstill shot, then, tada. He’s all set. However, if he’s moving forward with a splash setup he brings out the big rigs. Literally, he did major homework crafting a super-secret DIY rig that helps him gauge the splash. Ready, aim, fire. Not giving away any of his trade secrets, he usually lands the perfect shot within a few frames. Most importantly? Only a few ounces of beer gets wasted. PHEW. Also, trust his expertise and don’t attempt it at home.

The Beerdtographer focuses on all styles of beer and the pandemic has provided a need to keep busy and continuously hone his work. When it comes to picking that front-and-center lucky featured beer, it’s a bit of an eeny, meeny, miny, moe situation. Establishments he’d like to work with or already has a rapport with, as well as can art he’s fond of or beer he’s keen on all factors in. He also takes this opportunity to get clever with beer names…is it something he can play with? Whatever way he lands on a beer to feature, he gives a shout out to the HEB singles shelf that contributes much to his continued performance.

The beer community continues embracing Weathered Souls’ Black is Beautiful initiative for social justice. As Austin breweries raise their hands to take part, Ledden has lent his skills. “When I heard about the initiative, I wanted to contribute in the best way I could. I knew that I could only realistically buy a couple myself, but that if I could help promote it, I could help to sell many more than that.” He thumbed through the growing list of participants and reached out to each. Taking it upon himself to buy a set of Black is Beautiful glassware, he shot some example photos at home. Assuming he’d hear back from five or six spaces, the true response was inspiring. The first two locations he shot were The Brewtorium and Austin Beerworks, while capturing over two dozen releases since. 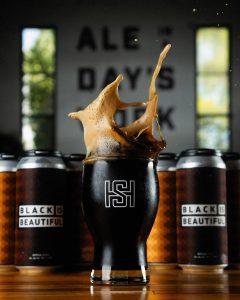 What Else Do You Shoot?

While Ledden is making a solid name for himself in the “kerplunk” beer photography scene, he says he also has a passion for photographing people. His knack for snapping a killer headshot is undeniable, but he fancies doing what he refers to as “environmental portraiture.” In a nutshell, they’re shots of people in the spaces that tell their story. His collection featuring brewer portraits is extra dear to his heart, admitting, “I like featuring the people making the beer, in the space they do their art. And also I feel like it’s rare that people want to shoot brewers, so I like to give them the love I feel like they deserve.” 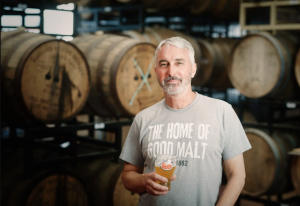 As a musician, Ledden also has a soft spot for photographing bands and their promotional work. The genre is “often a chance to be creative in a way that is obviously unrealistic,” he says. He’s also a fan of capturing weddings. He jokes when you remove the stress of it being someone else’s special day, as long as you have the experience and skills it can be a blast. (If you want a colorful story, ask him about his season with the wedding photography company. It won’t disappoint.)

You Should Hire Him…

The Austin beer world is a welcoming place putting community over competition. According to Ledden, that appreciation is the rewarding part. “I love Texas beer and I love the community we’ve built around it. I like seeing my work help to promote our beer and the people who make up the scene,” he adds.

If you’re a brewery in need of these prolific skills Ledden is looking for a permanent space to call home. Freelancing is hard work requiring immense focus with constant arrangements. “I feel like as a brewery there is a lot of value in integrating someone who has a skill set like mine. You can build a consistent visual brand that tells your story, with regular coverage and intimate access,” Ledden concludes. Focusing his efforts on telling a story and knocking it out of the park is the Beerdtographer’s true calling. Help this talented jack-of-all-trades find a good home!

If you don’t already, follow @thebeerdtographer on Instagram. Lots of gorgeous beer photos and fun features of the brains behind their creation. Thanks for shining a creative light on the Austin beer scene, Brian! Cheers to more successful messes!