Austin’s proudly adopted West Coast transplant, Shannon Harris is on a trailblazing mission to bring the first Black-owned brewery to the city of Austin. I had the pleasure of sharing some pints with him to learn about his impressive efforts to make the brewing world a more diverse & inclusive community. As a true advocate for BIPOC, he is leading by example in creating his own cultivated space, Urban Jungle Brewing. See how you can support Urban Jungle’s Kickstarter to get them up & running as soon as possible!

What is Urban Jungle Brewing?

“When I was looking at moving to Texas…everything just brought me to Austin, and now I want to give something back…there’s been nothing but love since I’ve been here.” | Shannon Harris

Urban Jungle Brewing is the brainchild of husband & wife team, Shannon @TheBrewBrotha, & Tiana Harris @BlondeBrewChick. Together, they dream of owning a brewery that will incorporate a sustainable farm atmosphere. Some of you may know the duo from their Instagram accounts, which have truly taken off over the past 5 years. Harris credits the popularity that @TheBrewBrotha account has received to building the relationships & support that inspires him today.

The name, Urban Jungle, comes from the couples’ love for gardening & the outdoors. Tiana brings a love of animals to the concept with her 20+ year champion show horse riding experience. Their green thumbs allow them to grow everything from peppers & artichokes to okra, lettuce, spinach, apples, pear trees, the list goes on. The exotic plants on their rainforest-esque patio truly transport you to what feels like a jungle oasis, not a backyard in the ‘burbs. Their love for both their homegrown forest & life in suburbia created the name, Urban Jungle.

Harris already makes a habit of incorporating his garden treasures into his beers. Using their berries in sours, adding flowers, like artichoke blooms into pale ales, & sunflower petals in saisons. They plan to grow their own ingredients to add as adjuncts to their beers moving forward as well.

We are pleased to announce that the 1st runnings of #BlackIsBeautifulBeer is here! This small batch of the @weatheredsoulsbrewing imperial stout came in at just 10% abv and conditioned on cocoa nibs, hazelnuts, toffee and Bahirwe African coffee beans from @redbaycoffee! Their rare sourced coffee added notes of brown sugar and pomelo fruit. This version of the worldwide collaborative stout also contains lactose to create a creamy, smooth but thick mouthfeel. Version 2 will be on the way soon. Much love to @armadillo_mc for the doing their thang on canning this up 🍻 donations will be heading over to @austinjusticecoalition ✊🏿✊🏾✊🏽✊🏼 #UrbanJungleBrew #BlackIsBeautiful

A Love of Craft Beer

Harris became interested in craft beer after attending an event years ago. At the time, he was a Bud/Coors drinker & found himself in queues featuring Stone IPA, Samuel Adams, & other beers he found tough to drink as a newcomer to the scene. Luckily, the beer gods were watching that day & a craft beer fan happened to observe him in line. In a nutshell, he said, “I live across the street & if you’ve never had craft beer, I’d love to introduce you to it.” Harris followed the good vibes & it worked in his favor! “He pulled out like 20 beers from lagers & berliner weisses to pale ales & IPAs, porters & stouts… we drank all those beers that night. It was like my first ‘bottle share,” Harris recalls. That friend eventually convinced him to move to Austin from Los Angeles where they continue to share & drink beer together.

Harris started homebrewing due to his nostalgia over California beer. He brags, “LA had a pretty gnarly beer scene, & no offense to Texas, but when I moved here, there was no comparison. I just started saying…I need to learn how to make the beers that I was drinking in California. I started to brew more & more.” He began sending his creations to breweries back in L.A. & around the country. He gained instant support, & positive feedback on the quality of his beer. Inquiries arose if he had ever considered shifting to the professional side. This motivated his endeavors into collaborating with breweries around the world. He brewed in Africa & Mexico, alongside Jay Wakefield Brewing in Florida, Dancing Gnome in Pittsburgh, & even Guinness, in all its glory. He recently collaborated on several Black is Beautiful releases with Redhorn Coffee House & Brewing Co. in Cedar Park, Urban South Brewery in Houston, & The Answer Brewpub in Richmond, VA. 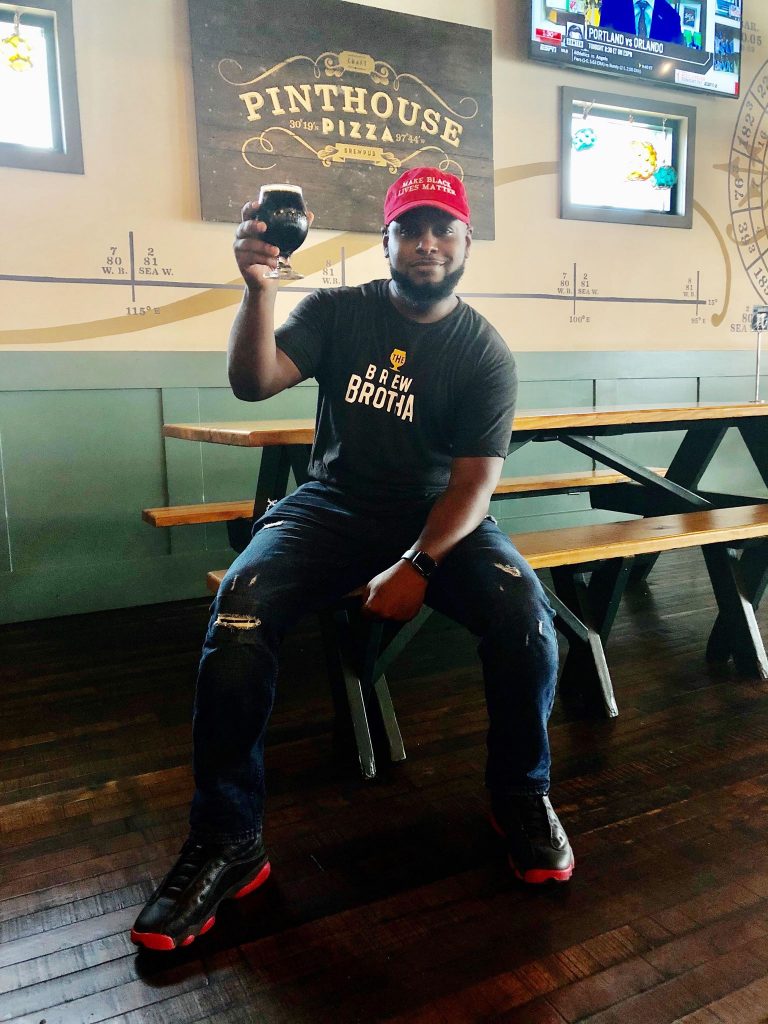 When can we expect Urban Jungle to open?

Urban Jungle’s Kickstarter is live with goals of raising money for their legal fees, permitting, & licensing. Harris’s target is to have a fully open & operating brewery by the end of 2023. “Major love to everybody who has supported & made pledges. We broke $10k in the first 24 hours, & that was just mind-blowing…I know that times are tough, but every little bit helps. Harris wants to “let everyone know that Austin, Texas is about to have the first Black-owned brewery…breaking down walls and opening doors in a state where we got a lot of barriers.”

Urban Jungle’s goal of reaching $60k by September 5th is off to a great start. However, if the goal isn’t reached, Harris is far from discouraged. He has full faith & drives that Urban Jungle will happen. He vows to do whatever is necessary to make his dream come to life. “Whatever I need to do, that diverse brewery is here, & it’s here to stay,” he promises.

Advocating the Importance of Diversity & Inclusion in the Beer Industry

In 2019 the U.S. had over 8k breweries according to the Brewers Association & less than 1% were minority-owned per a recent write up from our friends at PorchDrinking.com. Out of over 300 breweries in Texas, currently, Marcus Baskerville of Weathered Souls Brewing & the Black is Beautiful initiative is the only Black owner. Harris realizes that BIPOC can feel intimidated by the atmosphere noting that he’s frequently the only Black person in a brewery or festival drinking.

When asked what his white counterparts in the industry can do to help invite continued diversity, Harris stated, “Reach out & be more vocal. It sucks that it took what’s going on today like the death of George Floyd & Breonna Taylor for everyone to really say, ‘We are here for the community…’ because there are Black consumers out there, like me. I go to all the breweries and man, I show love. I’m there advocating. I need you to give it back.” He added, “It’s not a moment. It’s bigger than that…we’re talking about human lives in a country that advocates freedom for all men, & people are treated equally when that’s just truly not the case.”

Major love to the 305! Had to stop and visit my dawg @thirsty_samurai_piggy over at @lincolnsbeardbrewing! Art, beer, cuisine, and lifestyle are keys to Dade County! 📸: @blondebrewchick

Harris is doing all he can to include other minority-owned spaces as he builds his business. As a jumping-off point, he is collaborating with a Black hop farmer in Florida, a Hispanic couple that propagates yeast, & an LGBTQ couple in the Pacific Northwest who are starting their own malt company. Truly practicing what he preaches, Harris is making the effort to welcome diversity throughout his entire process towards the opening. Even looking toward the future, Harris has plans of making a lasting impact; working with Fremont Brewing in Seattle, Weathered Souls Brewing, Yakima Chief Hops, & Imperial Yeast to create a diversity program that would invite minorities to learn the process of brewing, opening & operating a brewery. Stay tuned for more updates in the coming months on this brilliant project!

On a final note, Harris has a simple request. “Breweries, brewers & beer lovers, I’m asking y’all… spread the love…There’s a lot that we can do as a community with our festivals & releases that can get more inclusion in this industry…So, if any brewer wants to talk about it? Let’s do it. Let’s collaborate, let’s work on diverse plans where we train to be more aware of diversity & inclusion. Be those voices & boots on the ground.”

Make sure to follow their journey on social media @UrbanJungleBrew, & contribute to the Kickstarer campaign. Instagram account @BlackBeerTravelers has put together a map showing minority-owned businesses to help diversify your palate! Cheers to inclusion & beer!