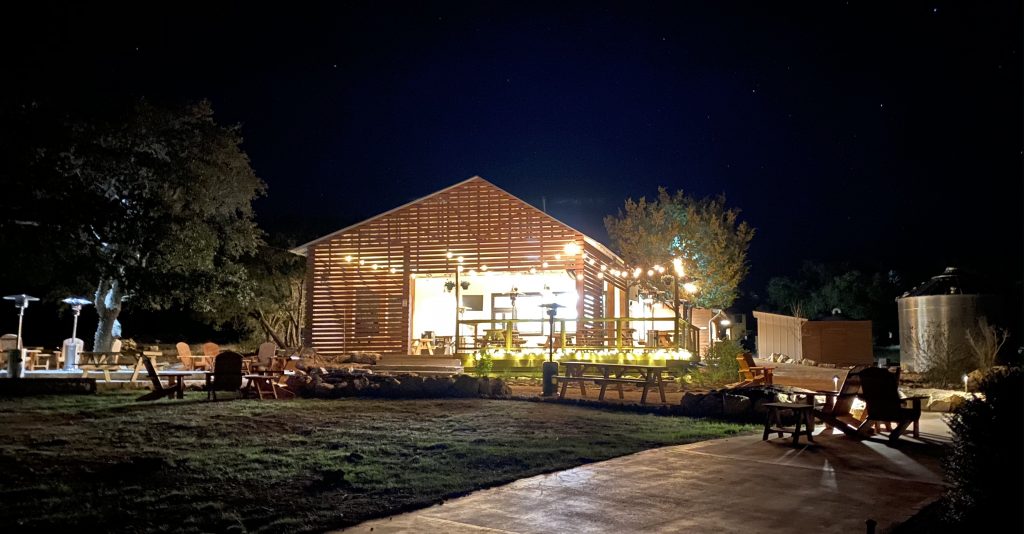 Although Covid is still lingering, we can celebrate the resilient craft beer community and the opening of another delightful Dripping Springs brewery. Ghost Note Brewing is the newest addition to the beer family, and I hope you’ll join me in giving them a warm Texas welcome.

What is a ghost note? Any musicians out there? Wikipedia describes it as “a musical note with a rhythmic value, but no discernible pitch when played. The unaccented notes are considered to represent the mean level of emphasis—they are neither absolutely emphasized nor unemphasized.” Glenn Letsch’s 2008 book “Stuff! Good Bass Players Should Know,” states, “It is more percussive sounding than obvious and clear in pitch. There is a pitch, to be sure, but its musical value is more rhythmic than melodic or harmonic…they add momentum and drive.”

The Ghost Note founding team of married couple Kenny and Thelma Coleman found inspiration in the parallels of life’s special moments and the above definition. Their website elaborates, “Ghost Notes aren’t only in the music. To put it succinctly, we all sense the Ghost Notes — those gentle, intangible beats tapped out from countless sources, past and present, that quietly add texture and depth to our lives. These echoes of the past are more felt than heard — unnoticed when they are there, but noticed when they are not — like a summer breeze or an inspiration. When that journey moves through Texas, the notes can be as rich and diverse as the history and landscape itself. They are crafted from the time-tested lessons and adages of the past, forging new riffs into the future, culminating in their own distinct rhythm, inescapably linking the old with the new.”

The Colemans completed their creator trio with the addition of Head Brewer Tyrell Elliott. He answered a job posting and the rest is now history. Being first-time brewery owners, the Colemans were grateful to have his help and expertise along the way. He jumped right in grabbing a hammer and nails literally helping build his new oasis. Elliott began his beer journey as an avid homebrewer and eventually joined the brewing team with Austin’s longstanding Thirsty Planet where he remained for five years. 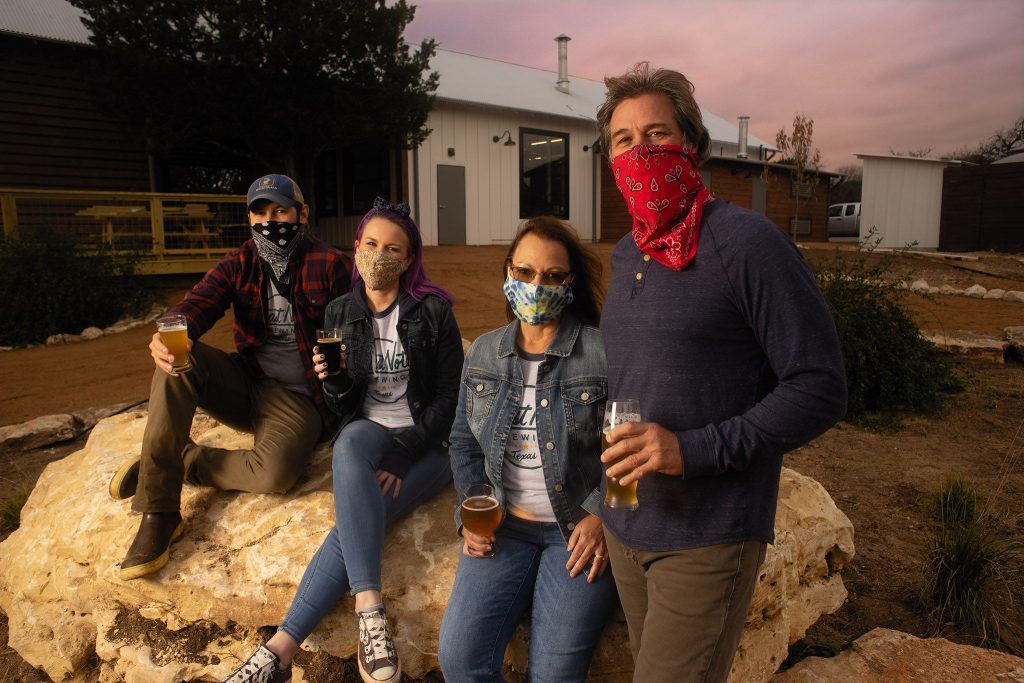 Originally from Montana, Elliott has now called Austin home for 10+ years. Thelma and Kenny traveled extensively but always felt the pull to come back to Texas. Their love for Texas, each other, and for sharing it with others can be felt in every nook and cranny of the space. “Deciding to start our brewery was a mixed bag of exhilaration and fear, but once the commitment to actually ‘pull the trigger’ was made, it has been a wild ride of behind-the-scenes studying, budgeting, decision-making, learning, discovery, fretting, and mind-numbing paperwork. The Craft Beer Industry, though, is one that is welcoming, helpful, and offers support to all its colleagues so that has been one of the biggest pleasures is to be a part of such a great group,” Thelma states. Neighborly entertaining truly drives them, and Kenny’s goal for all that stop in is to “make them our friends, make them each other’s friends…invite them out like it’s their backyard. Get away from the day to day for a while,” he adds.

When asked what’s been the most rewarding part of opening a brewery Kenny joked that they haven’t had time to even reflect on it yet…the whirlwind journey has been so go, go, go. Hopefully, relaxation will be the new norm for this hardworking team now that they’re up and running.

Ghost Note plans on offering 8-12 of their beers as well as guest wine and cider on tap. Their “porch beers” style guide will focus on moderate ABV’s complimenting a day-trip/destination mentality. Elliott likes to “rip on classics with a subtle twist,” as he words it, and they don’t want any guests to feel overwhelmed by beer culture. They aspire to be the friendly face that’s happy to talk beer with newbies and experts alike.

On opening day you can expect their Black is Beautiful Stout. They partnered with Austin’s Greater Goods to offer a bourbon barrel-aged coffee imperial stout. All my favorite liquids in one drink! 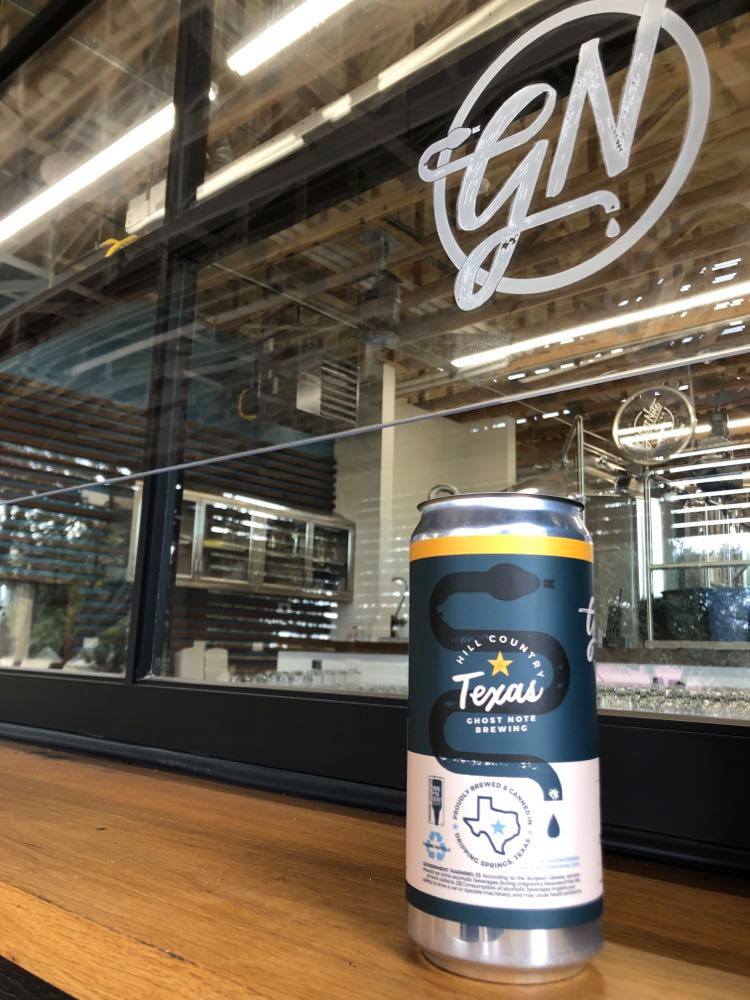 They will also have their Mic Check Blonde Ale which was their first beer… ”Testing, one, two, three…is this thing on?”…get it? Very clever. They’ll also have their Shoulda Been a Cowboy West Coast Pale Ale, That Tracks Modern IPA, The Hill Country (California) Common, the Texas Sun Saison, and the Painted Porch Pilsner. They do plan on having a core four of styles, and you can try them all in a flight served on locally crafted flight boards. Special glassware will be used to match styles contributing to the optimal mouthfeel. Specific glassware was created for the Black is Beautiful release as well. Don’t forget to snag some crowlers on your way out. 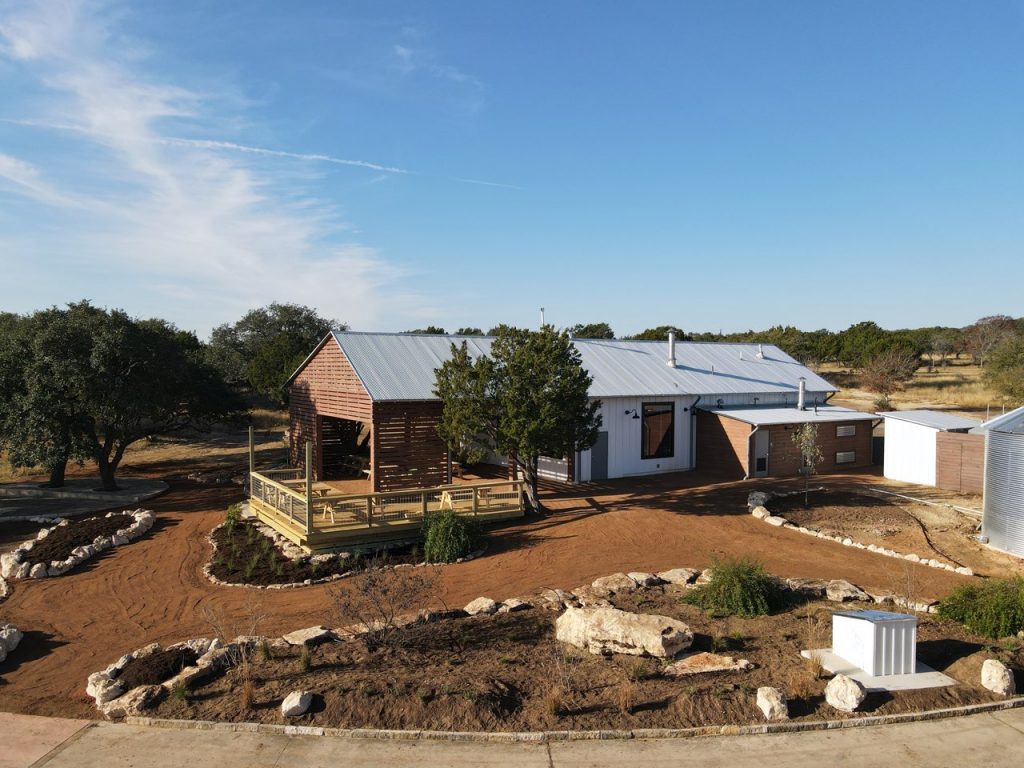 Ghost Note plans on having live music, although Kenny reminds us that “there’s music all around us.” Nature provides a pretty beautiful soundtrack if we just slow down and listen for it. In the Spring they’re hoping to have a stage built where they can offer consistent weekend music. Stay tuned for updates on that front. When Covid eventually allows you can join in fun yard games, and set the kiddos free on their playscape.

This charming outdoor spot is dog friendly, and they look forward to welcoming all their future 4-legged regulars. Elliott even jokes that someday he may make a pooch-safe beer (no hops or alcohol, of course) so they don’t feel left out. If you’re lucky, you may meet Raymond, the 30-year-old free-range donkey who wanders the area saying hello. Make sure to snap a picture and tag them if you land a “Raymond siting”.

The taproom is completely outdoors which makes it Covid ready! The shaded patio takes summer’s into account and the large heaters make for cozy winter sits. The brewery sits on five acres of property on what once was a wedding venue. A few feet away you can find an adorable rentable Airbnb called La Hacienda. How convenient?!

Future plans exist of renovating the existing buildings on the property which range in size from 1-5k square feet. The old bridal suite will eventually be a quaint bed and breakfast. Although there were several existing buildings the team opted to start fresh and create a shiny new brewhouse built by the brewery creating extraordinaire team at Opa Designs who also crafted nearby stunner taprooms like Vista Brewing, Family Business, and Beerburg Brewing. Ghost Note’s emblem was created by Codo Designs in Indiana, well-known for re-branding brewery logos. 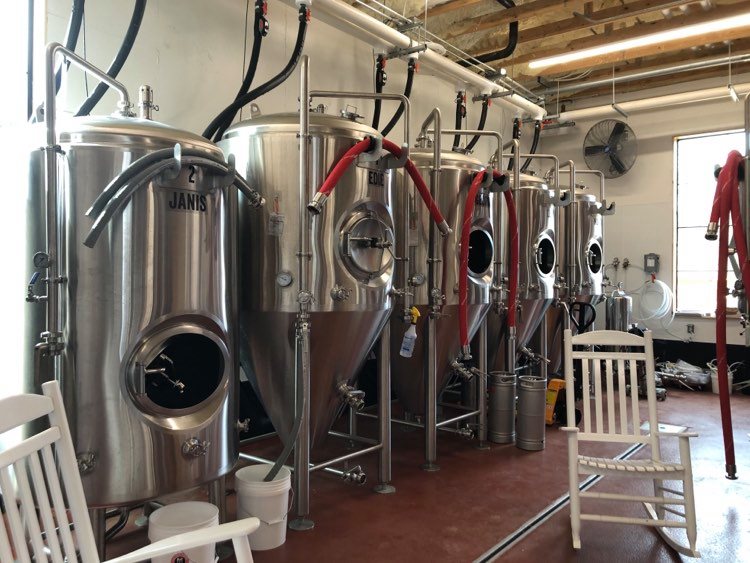 The brewhouse holds a 10-barrel system, two foeders named Willie and Walen, and a small pilot system to test the quirkier “whimsical” beers. One foeder has an open top for barrel aging big fruit additions. Each tank is named after a famous Texas musician like George Strait, bringing the namesake full circle.

Next time you’re looking for a lovely spot to get away, and enjoy a cold one with new or old friends, add Ghost Note to your list. You can even plan to stay the night, next door. Their unofficial motto is, “Phones down drinks up.” What a great reminder to slow down and turn off.