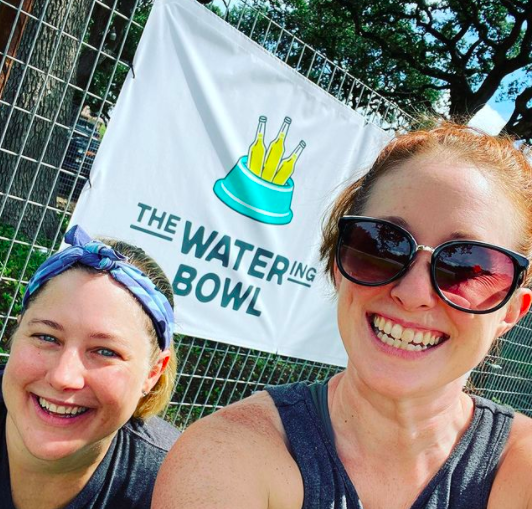 Dog-owner/beer-lovers, are you paying attention? An exciting new endeavor combining pups, people, puns, and beer is opening soon in South Austin! With dreams of providing a space where dog owners can go watch their canine friends play, romp, run, and zoomie to their hearts’ desire, while enjoying a hyper-local craft brew, The Watering Bowl is the perfect spot.

“We are both locally and woman-owned with the dream of helping you remember how to think and love like a dog: in the moment and unconditionally. The rat race is real and we know it. Take time to remember what is important and be present. Make new friends, have fun, and live every day like it’s the BEST. DAY. EVER.” – The Watering Bowl ATX Website

What used to be several homes and even a relocated chapel on the grounds has transformed into the stunning fully outdoor, fenced-in puppy paradise. The chapel is being taken apart in pieces, made into tiny homes, and donated. How cool is that? When you walk in you will be guided to a series of fenced-in holding spaces. They’re doing a great job anticipating and mitigating any bottleneck or resource guarding spaces. Once you’ve passed through this station the world is you and your pup’s oyster!

The off-leash area also called “The Park” provides space to run, a splash pad – the dog Bellagio, and an enrichment activity area. Gender-neutral bathrooms with an outdoor sink are located in The Park as well so you never have to be far away from your pups. Nine-foot tall Cedar plank fencing outlines the landscape to keep even the jumpiest of jumpers safe and sound…they’re stunning to look at too! There are picnic tables, Adirondack chairs, and there’s plenty of shade from the many beautiful trees.

Swing by the bar to snag your favorite local beverage! The Watering Bowl doesn’t just promise to “water” the doggies but also promises to provide delicious local beer, cider, and other beverages to keep the humans happy and hydrated as well. As they finalize their tap wall you can still grab plenty of local options in cans. Don’t miss the display of adorable pups looking for their forever homes. Pass it along!

Eventually, recurring events like live music, Painting with your Pup, Pup Trivia, local artisan pop-ups, and more will be the norm.

Who’s Behind This Exciting Spot?

The Watering Bowl is the 7-year’s worth of hard work of Leslie Paetschow, a lifelong dog rescuer and foster, who also happens to have a knack for the service industry. Heather Spearman, Chief DOGperations Officer (I mentioned they love puns) joined the ranks to help make this brilliant spot a reality. Spearman is also a longtime member of the rescue world and even juggled soft opening prep days with a jaunt to Houston to transport a rescue here to Austin. These women really never stop! Both have been involved in multiple rescue organizations and currently spend time with the Austin Bulldog Rescue.

The two met while Paetschow was hosting an Austin Bucket-List Party for her foster pup, Travis, at the Y. Unfortunately, she only had a few weeks with him due to a terminal cancer diagnosis, but Paetschow wanted his last days to be full of love, joy, and a bucket list of delicious Austin-area burgers! Spearman helped host the party where Paetschow got to see her in true form and knew she wanted her love of dogs and ability to run a fantastic event on her team. 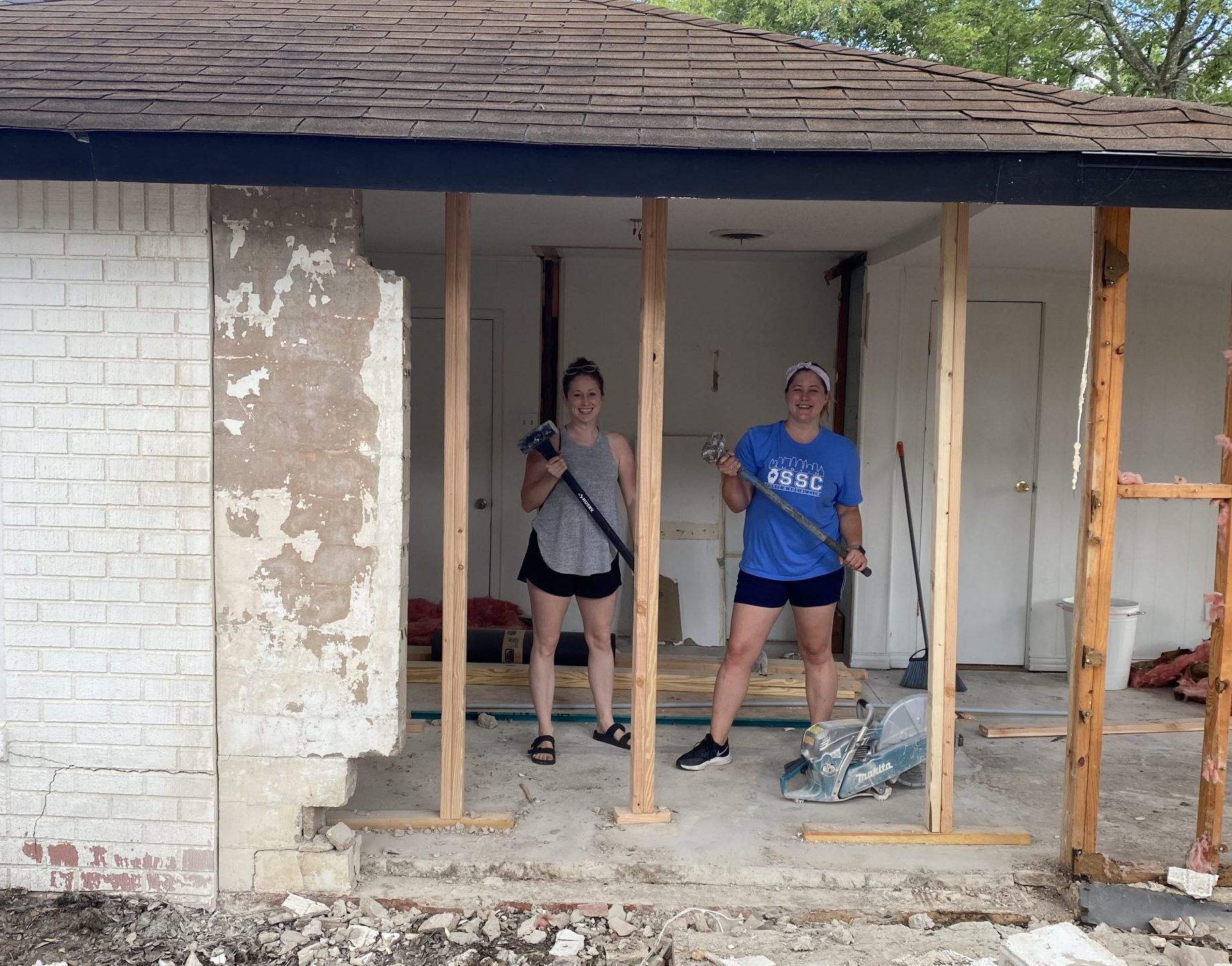 Paetschow adopted Austin as her city coming from Dallas. The dog-friendly community, great hiking, beautiful outdoors, and the diversity of activities and cuisine Austin delivered were just too enticing. Spearman is a pre-Covid Austin transplant whose plans of jumping into the workforce upon moving here were thwarted when the world shut down. Instead, she grabbed her trusty sidekick, her adorable young son, and started helping dogs. Her mix of experience in HR, event planning, and the service industry created the perfect yin to Paetschow’s yang!

Paetschow’s mission for the Watering Bowl is full of passion, dedication, and is incredibly inspiring. She notes, “I first got this idea seven years ago because my dog was one year old and I had just adopted him. He had so much energy to burn. I hate running, but I learned how to run for him. We’d go for six miles, and then at the public dog park down the street from my apartment.  On Saturdays I was like, I would love to have a beer. You know, it’s a Saturday. I want to enjoy it, but also want to do the right thing for him. And finally, it just dawned on me, ‘why doesn’t this exist?’ At that time, there was a dog park called Mutts Canine Cantina in Dallas, but they hadn’t even opened yet, I saw that was coming soon and I was like, ‘Okay, I’m onto something.’” After working corporate and startup jobs she realized the common burnout from the corporate world expectations was real. “What I want this place to be is a space where people can come and think and love in the moment unconditionally because we all need a little bit more of being present and just feeling accepted, we need that,” she adds.

A fully dog-trained staff of “Ruffarees” will be on-site every day to help ensure everyone is safe and fun is being had. They know how to recognize dog body language and aggression. Owner of Fuzzy Matters, trainer Laura Fennell has gone above and beyond working with the staff to prepare them for this new endeavor. Fennell herself will frequently be on site keeping an eye on everyone as well, and will even utilize the space for occasional training sessions. “Bark-tenders” are there to take care of you at your local watering hole…ahem, I mean, bowl! 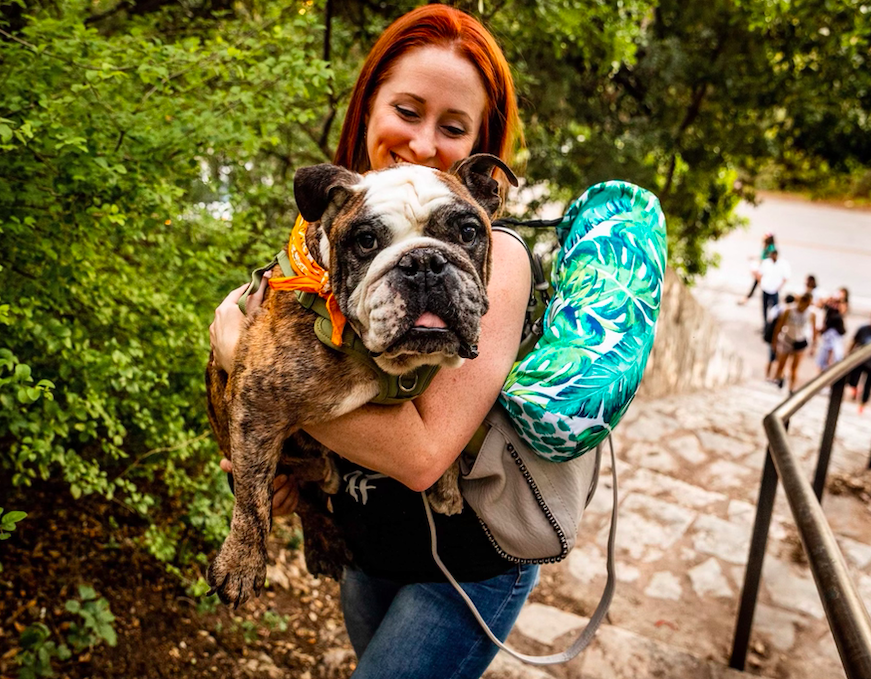 Eat Before, or After

There will not be food on-site in anticipation of food-drivin pups with the exception of some easy finger foods. When asked why, Paetschow shared a very simple, yet profound premise based on her own experiences at other dog park/bar spaces. “You can’t eat the food in the off-leash area, for good reason. It’s gonna start a dog fight, and you’re probably not going to be the one to eat, regardless,” she jokes. “You have to be outside the fenced area to eat, but for me, that’s not why I go to a dog park and bar. If I go, I want to be watching my dog play, wear his little patootie out so that we can go home…he sleeps, and then I eat.” She continues, “My dog is velcro. He’ll follow me and won’t play in here if I’m not in here with him and I know a lot of other people have that same scenario with their dogs. So, either your dog isn’t playing while you’re on the other side because they’re so focused on trying to be with you. Or you have them with you and then they’re not getting their energy out because you’re not in the dog park…so for me, it just defeats the purpose. The concept is just like, watch your dog play and have a couple of beers!”

Pricing for your dog is $10 for a day pass, and you can come and go. Memberships start at $30 for a month with pricing deals for 6 and 12 month-long memberships. They are running an early bird monthly special right now for $25! Humans shouldn’t expect a fee to enter and you’re welcome to join even if you don’t have a pup. They figure, more hands for pets and scratches mean some super happy doggos! The membership gives you unlimited access to the park, invites to exclusive events, merchandise discounts, and priority access to dog training classes. On your way out, you can reward your good doggies with some Barkin’ Creek dog treats and toys!

The Watering Bowl hosted its soft launch on August 28, 2021 and can’t wait to see what the future holds. Make sure to follow their Instagram and website for any PUPdates…and a lot of cute dog pics!